Use Electronic Hunting Calls For Hunting

Views : 154
Author : tacband
Update time : 2022-04-21 16:12:16
Hunting is much more than simply heading out into the woods with a rifle or weapons and coming back home with an animal strapped to your car's bonnet. The hunter must plan how to lure an animal to walk into his territory. He accomplishes this by appealing to the animal's senses. He uses the animal's sense of sight by erecting a decoy that resembles a specific creature in the hopes of attracting prey. A hunter appeals to the animal's sense of smell by smearing something appealing to his prey on his clothing. Finally, by generating sounds that are pleasing to the animal's ears, a hunter appeals to its sense of hearing. These noises are referred to as hunting calls.

Hunting calls are sounds produced by hunters to attract particular animals. Some hunters use their hands and mouths to produce hunting cries. Others make their hunting calls out of store-bought or homemade items. There are lots of strategies and sounds that a hunter may learn, believe it or not.
Hunting calls, as you might expect, sound like animal noises. When female deer, for example, are hunting for a partner, they produce a distinctive sound. Male deer will be attracted to a hunter who imitates the sound. Different noises attract different animals; therefore, you'll need to figure out which call lures particular species. After all, calling for a turkey and unintentionally inviting a bear is unlikely to end well.

However, mating cries aren't the only technique to attract prey. You can also get their attention by greeting them with a warm "hello" on their tongue. But how do you do it?

Although you may spend time learning techniques to mimic animal sounds, electronic calls devices are excellent tools to use and make your hunts a lot easier and more effective. Electronic calls use a computer chip to hold multiple sounds and operate at the touch of a button.

For example, if you were hunting coyotes, you can use electronic hunting calls. 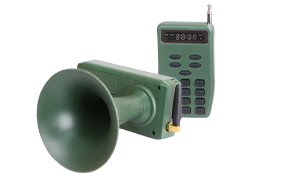 * Built-in timer to turn on/off * Remote control as far as 200 meters away * Choose the sound numbers and play * Support lithium batteries or 10xAAA batteries (not included) * Support TF card for more memory and soundtrack * 110 animal sounds of varied species and activity status * Built-in 35W speaker,130dB.
To be successful in hunting these creatures, you must use their instincts and call against them, and understanding how to utilize an electronic predator call is a fantastic method to do so. The distress, group, or lone sounds of the coyote, as well as a variety of other predators, can be accurately simulated using an electronic call.

Tracking, tracking, and catching a coyote is nearly impossible because they are such smart animals with a sixth sense that alerts them to human hunters. This implies that if you're going to go hunting for them, you need to invest in a good electronic call.

Coyotes and predators are sensitive to a wide range of sounds. They will reach anything that sounds like it could be food.

For instance, birds' distress calls are frequently answered, as a distressed bird may indicate a fledgling on the ground, which a coyote might consider easy prey. Almost any animal distress call can be successful, which is why most electronic callers have a range of these to choose from.

There are various electronic game calls/hunting calls available for you in Tacband, to enhance your hunting experience.
The GCP01 | Electronic Game Call 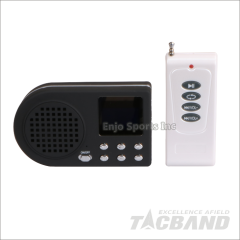 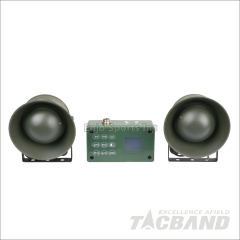 * Fully sealed for Sand Resistance
* Built-in Timer to turn on/off and play
* Two 50W loudspeakers for long-distance attraction
* Power cables with forceps to use with a DC12V power bank.
* 182 animal sounds for most animals at different activity status
* RECALL Key to easily shift cut the audio from the current play audio back to the pre-play one. 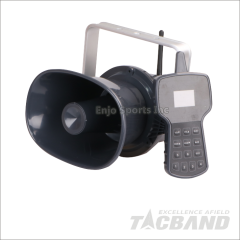 * 50W loudspeaker of up to 150dB. for attracting animals from far away
* 400+ sounds with different animals and birds.
* Two-way remote control for operation up to 250 yards away
* Support an external speaker output and an audio input.
* Supports 6 hotkeys for remote controller
* Game caller uses 10xAA batteries and supports an external 12V power supply. The remote control uses 3xAA batteries.

Many hunters have employed mouth cries made of wood, bone, horn, and plastic in the past. While this worked for highly trained hunters and predators who were less wary than today's predators, gaining an advantage over today's predator species necessitates improved approaches.

The old manual methods need a lot of talent to employ, and only a few people can do it well. Electronic calls are capable of producing the exact animal call the first time and every time. Here's a quick rundown of the several benefits that e-calls provide. 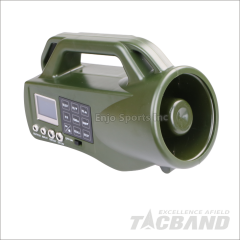 Ability to store a variety of cries, including distress calls from a variety of species, which predators will investigate.
They work in all kinds of weather situations, unlike manual calls, which can fail you in inclement weather.

Many electronic calls are programmable, letting you mix and match calls to find the optimum combination for your predator. For instance, Coyotes react better to distress calls, low-frequency lone howls, and yelps.

Electronic game calls are tough, resilient, and weatherproof, so they can withstand a lot of damage and endure for a long time in the field.

With your hands and eyes available to concentrate on the surroundings, you can spot a slinking coyote with your binoculars thanks to an electronic call. 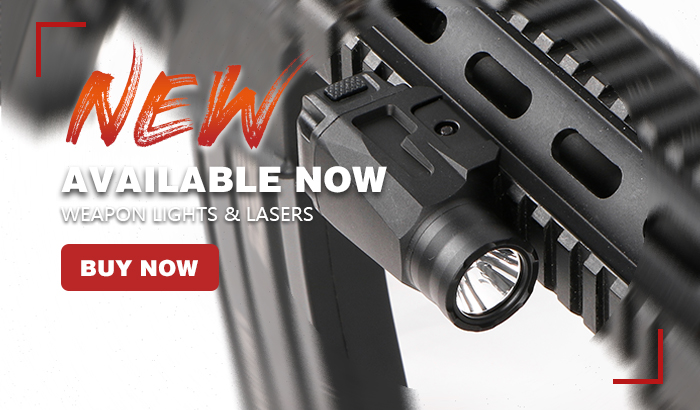